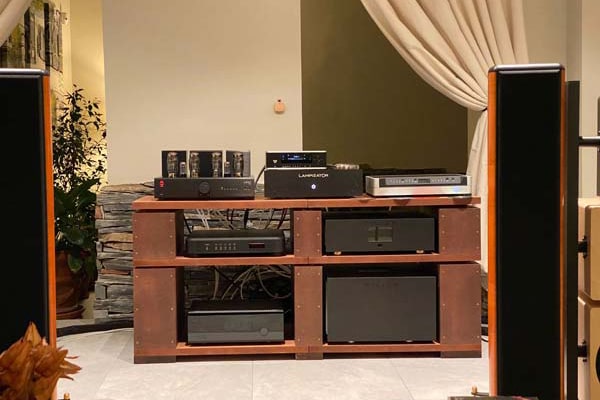 Do you know France-based Kora? Based in Toulouse, the ‘Silicon Valley’ of France, the company’s principals work in the Aerospace industry specializing in power supplies and signal treatment while also building integrated amplifiers that utilize tubes and transistors in an unconventional manner.

Here’s the company on their Square Tube Circuit:

Four tubes are used to make a single amplification stage, hence the name! The SQUARE TUBE « outputs » a symmetrical signal with respect to the reference ( earth ). In other words, the signal goes alternately in the field of positive voltages (to push the diaphragm of the loudspeaker) and in the field of negative voltages (to pull the diaphragm). This unique capacity with vacuum tubes makes it particularly suitable for the design of audio amplifiers.

In your Kora amplifier, the SQUARE TUBE provides all the functions of amplification and control of the audio signal. At the output stage of the SQUARE TUBE, the signal is identical to the one which is input to the speakers. Complementary power transistors, audio and hyper-linear will give the current required by the speakers, but without interfering in the amplification of the signal.

We are definitely talking about a tube amplifier here!

A traditional tube amplifier would replace the 12AX7s found in the Kora’s output side with power tubes, e.g. 300Bs, i.e. big tubes, to amplify the small signal tube’s voltage, while adding an output transformer to deliver the current required to couple the amplifier’s output stage to the loudspeaker. In the TB140 we have the 12AX7s providing voltage amplification and instead of an output transformer, we have transistors providing current delivery.

The company claims this approach avoids a number of issues found in transformer-based amplifiers by offering no phase shifts on low or high frequencies, no bad coupling on low end, and no current limit. This last bit, no current limit, should translate into an iron grip on any speaker load.

After an extended radio silence of several years, the Kora company started to re-emit a strong and clear signal since last year thanks to its new range of integrated amplifiers animated by a new circuit. The surprise was as unexpected as it was beautiful when it reappeared in 2018 by announcing the birth of a new concept of hybrid amplification around a scheme where the tubes were
implemented in a modern way within ‘an owner floor called Square Tube.

After an extended radio silence of several years, the Kora company started to re-emit a strong and clear signal since last year thanks to its new range of integrated amplifiers animated by a new circuit. The surprise was as unexpected as it was beautiful when it reappeared in 2018 by announcing the birth of a new concept of hybrid amplification around a scheme where the tubes were implemented in a modern way within ‘an owner floor called Square Tube.

Developed by Bruno Vander Elst, director of the company Kora High Fidelity, the Square Tube circuit is actually an operational tube amplifier whose technical name is Vacuum Tube DC Operational
Amplifier for op tube amplifier that passes direct current. But where can the square come from? The final prototype implemented to validate the concept arranged the four tubes of the floor in square, the idea was thus retained for the final name of the floor.

The four tubes we are talking about are famous double triodes of the ECC family, specifically ECC82 and ECC83, polarized in pure class A with, therefore, an operating point placed in the middle of the load line. This operating point is imposed by current source on the two ECC83 triodes input into the differential stage and by reference voltage for the two ECC82 triodes output in order to guarantee a maximum service life. The heating of these tubes is regulated, direct current and referenced to earth for ECC82, but alternating and floating for ECC82. They compose a voltage amplificación stage whose dynamic gain is extremely high on the one hand, and whose output attacks a push-pull stage with additional Motorola original power transistors polarized in class AB on the other hand. This output stage thus works as a follower, without gain and at very low impedance, which guarantees very high operating stability, even on complex loads. It somehow replaces the output transformer of a fully tube amplifier without the usual technical drawbacks such as problems of phase shift in the bass and treble, poor coupling in the bass and
current limitations. Let’s sum up. The Square Tube provides the amplification and control functions of the audio signal, the output transistors adapt the current demand to the speakers, they «transform» current what the tubes amplify in voltage. In the case of the TB140, the youngest in the catalog made up of two other more powerful models TB200 and TB400, the four tubes of the Square Tube assembly are supplied between two seriously regulated and stabilized voltage rails, a positive of +280 V and a negative of -180 V, i.e. a total high voltage value of 460 V.
The voltage at the output of the Square Tube is therefore a balanced voltage, or alternating with respect to the audio ground, which defines the final power of the amplifier after conversion into current through the transistor power follower. A portion of the total voltage of 460 V is used to obtain the nominal power of the integrated unit, which will never work under stress.

The chassis of the TB140, like that of its two big brothers, is entirely made of aluminum plates covered with a matt and glitter paint in an anthracite gray tone. The front face adorned with the brand logo receives an acrylic plate on three-quarters of its upper part. On the right, a flush dial allows pressing and rotating to navigate in the menu of the TB140, it is assisted by
a display with yellow LED diodes which materializes the programming in the menu and more generally the current operating state of the device (connected source and volume level in particular).
For example, you can use the menu to adjust the balance between channels or adjust the sensitivity of each input in order to maintain the same sound level when switching from one source to another.

The TB140 is supplied as standard with a remote control which takes over the current functions. The transistors of each channel are placed on a finned heatsink glued to the rear panel. A 300VA toroidal power supply transformer placed in the front center provides the voltages necessary to create the internal 460 V, two 10VA auxiliary transformers supply power for the timed heating of the tubes. The Square Tube is located on the vast circuit at the bottom right. Two other smaller cards, one on the back of the wheel and one at the bottom of the chassis, manage the display, the wheel controls and the source selection, the control signals pass through a ribbon cable.

We used the Kora TB140 indifferently on our three usual pairs of speakers, the T&T Nel Ultime, the ZU Soul and the Diptyque DP 77. Although these three models have radically different requirements, the Kora has been able to satisfy them every time. We can therefore validate its versatility, in terms of coupling with the different speakers. Regarding the wiring, we stayed
on relatively simple models. According to the designer, exotic references are not his strong point. We have nevertheless noted that a good power cord brings a more obvious to the performance of this device.

How to describe what is indescribable? This is indeed the difficulty that we faced when listening to the music reproduced by this integrated amplifier Kora TB 140. Quite often, electronic devices dedicated to sound reproduction have a paw, a personality, a kind of identity with which we recognize them, and who characterizes them.

Of course, the eclectic music lover with intensive consumption will rather seek a product which banishes colorings, and which tends towards neutrality. Fortunately, there are neutral products. A priori therefore, this Kora is to be classified in this last category. To tell you the truth, we spent a lot of time listening to it, before trying to analyze its performance. Because performance is a question here. Indeed, the TB 140 gave us a very nice demonstration of musicality. We have tried many different messages and styles with him. From symphonic to rap, from techno to new wave, everything goes admirably, provided of course that the disc has been produced correctly.

What can we say about its intrinsic performance? The bandwidth is wide, but not the widest we have heard. On the other hand, what characterizes the spectrum reproduced by the Kora is an absolutely remarkable consistency for the price. From the deepest bass to the widest treble, there is no break in the timing. We find this wideband type signature that characterizes the most musical products. This device knows how to demonstrate homogeneity. During listening, we therefore have the sensation of tasting an incredibly coherent message. A bit like a concert. As a second point, we will emphasize the lack of grain that this amplifier demonstrates.

Whether on a large symphonic band, or on a small jazz trio, only the substantial sonic essence is transmitted to us, and none of the slag that could pollute it. This feeling, that of purity, is just as exhilarating as the first. The two combined allow us to access the musical message more directly. With the Kora TB140 we are undeniably closer to recorded music. Finally, we had an immense pleasure in feeling the way in which this amplifier is capable of reproducing the sound stage. With him, sound never lives in the listening room in the same way. Each disc has its panorama, its structure, and its space. Your living room thus takes on different proportions depending on what you are listening to. From minimalist it becomes majestic, from intimate it becomes spectacular.

The Kora TB140 is thus able to fade completely before the intention of the sound engineer to recreate exactly what the musicians wanted to transmit to us. In this sense and at this price, it is a performance that should be saluted very low, because it is rare.

We had a real crush on this device, and all the more marked, that we salute here a French achievement. We know that we have brave engineers and innovative designers in our country, but when they venture this far in the quest for sonic pleasure, we must greet it with vigor. The resurrection of the Kora brand has begun successfully. The youngest of the new range has completely convinced us and I cannot hide the fact that we are eager to listen to the rest of the siblings. Bravo, 1000 bravo to its designers.

Diapason magazine awarded our TB 140 with his prestigious trophy ! Thank you Diapason for this honor and for your trust.

A very pleasant surprise with this Kora model, the most accessible of the range and devilishly musical. Because the French brand has developed a completely new principle which consists in using the same tubes (ECC82 and ECC83 in triode) for both the preamplifier part and the amplifier. The signal is therefore transmitted to the transistor output stages without any real modification, this in favor of a very decreasing distortion.

Obviously the success is total, the music flows with a lot of naturalness, ease and strong pretty tones. On violins in particular, so demanding, which rediscover their smoothness, their original tonal richness. The sound image seems to be rid of the slag heard in too many transistor amplifiers. A great discovery.

You can read the article here. 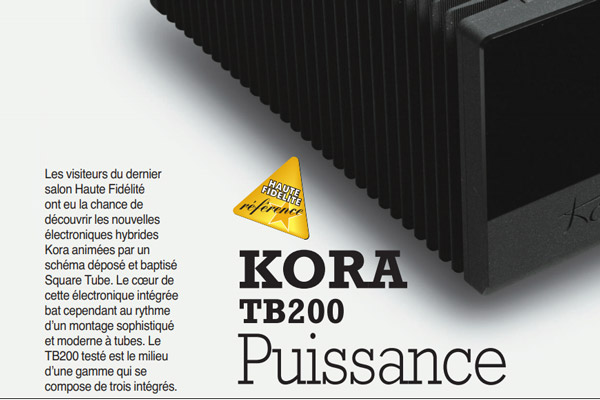